The way consumers charge their smart devices is about to drastically change, with wireless smartphone charging systems expected to surpass 1Billion units per year by 2024

This report’s objectives are to:

THE CONSUMER MARKET AS A GLOBAL DRIVER

Wireless charging has seen substantial industry interest over the past several years, from its association with smartphones to its integration in Starbucks coffee shops. However, the market for wireless charging will remain highly uneven and consumer-oriented: for example, consumer charging is expected to surpass 1.2B receivers in phones by 2024, but wireless charging for electric and hybrid-electric vehicles (EV/HEV) will not see market acceptance before 2022 – and only then as an option for high-end cars.

The general consumer market’s need for wireless charging is very recent, and linked to the prevalence of consumer electronics such as smartphones, earphones, smartwatches, etc. These devices require frequent charging, which “surrounds” the user with power cables. Because it is still an “early” market need, consumer wireless charging could have been a slow technology push. However, adoption happened faster than expected thanks to a very peculiar market situation: technology integrators crave new differentiators, and wireless charging is a perfect example.

In the smartphone industry, as well as in consumer services and the automotive market, a slightly interesting capability can become a strong differentiator with tremendous financial repercussions. For instance, when a new set of emojis is enough to motivate a new smartphone purchase, the possibility of wirelessly charging the phone in a coffee shop can have the exact same effect.

Technology developers and integrators have combined forces to push wireless charging implementation, not just creating a new market but also educating it very quickly. Wireless transmitters can now be found in furniture, airport terminals, and restaurants, while mats able to recharge multiple devices from the comfort of one’s home are in development. In light of these innovations, the general electronics industry is motivated to move towards wireless charging-compliant solutions. Down the road, what is today a hypothetical could become the standard, with phone manufacturers like Apple bringing “cordfree” devices to the mass market.

In other mass markets, wireless charging’s presence is definitely the product of a “technology push” approach. This is especially true for electric vehicles, where wireless charging will in the mid-term be limited to an option for high-end e-cars, without much traction for general consumers.

In this report, Yole Développement (Yole) focuses on consumer and mobility market differentiators, as well as industrial, medical, and military markets where separate differentiators are important. Market forecasts are provided for each market segment, along with estimates for the requisite wireless charging components. 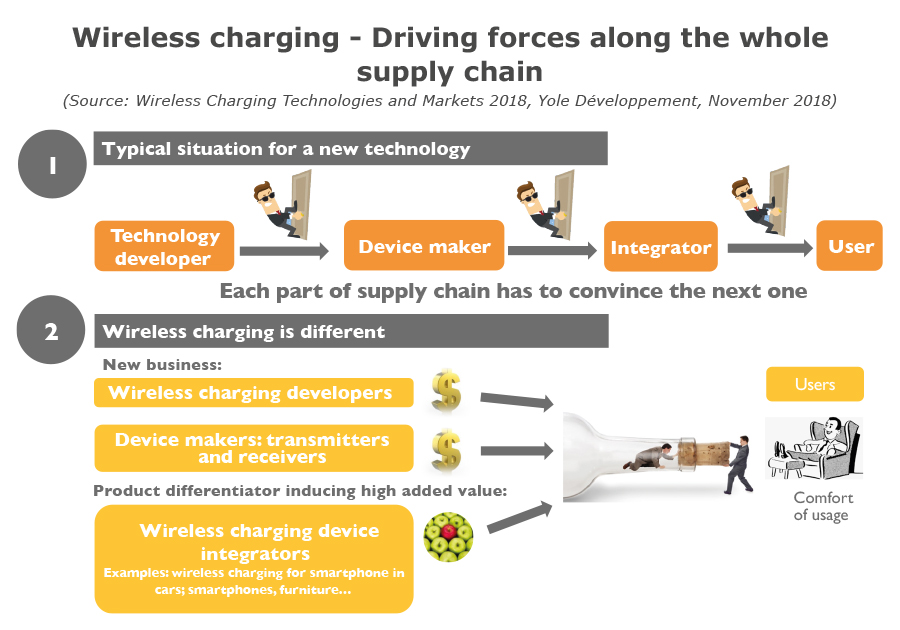 For consumer electronics as well as prospective mobility use, only two technologies are commercially expected in the next five years: inductive charging and magnetic resonant charging. These two approaches are similar technology-wise, but their characteristics are quite different.

Inductive charging requires a strong coupling between a transmitting coil and a receiving coil, thus forcing the transmitter and receptor to be extremely close to one another, and in a specific position. This charging technique disposes of the cable but it does not offer any flexibility for using the phone during charging, and only limited flexibility for phone positioning. Nevertheless, this is the only commercial option because of its maturity and relatively high efficiency. Mobile phone players like Apple are working to improve this technology’s efficiency before moving to the next stage of wireless charging, which is resonant charging.

With resonant magnetic charging, the transmitting coil and receiving coil are loosely coupled but work at a similar frequency. This allows devices to be used at a slightly greater distance from the charging area, thus increasing freedom of positioning. This new kind of charging is expected soon for consumer electronics, with existing prototypes capable of working with Qi-standard-equipped phones. Unfortunately, resonant charging is still immature and has low efficiency, two obstacles inhibiting its market adoption.

Despite its current drawbacks, resonant charging’s potential offers an interesting prospective market for GaN component manufacturers, which would benefit from a MHz-range resonant technology (i.e. the 6.78 MHz band). This is dependent on whether the industry decides to switch from the current 105 KHz- 205 kHz bands to higher signal frequencies.

Other technologies like capacitive wireless charging, laser charging, and microwave charging are today at laboratory or prototype level, and destined for very specific applications such as military or aerospace use. It is unlikely that we will see them successfully enter the consumer products arena anytime soon.

This report offers a deep analysis of the physical and technological concepts of inductive and resonant charging, and explores the physics and technologies behind their defining elements. 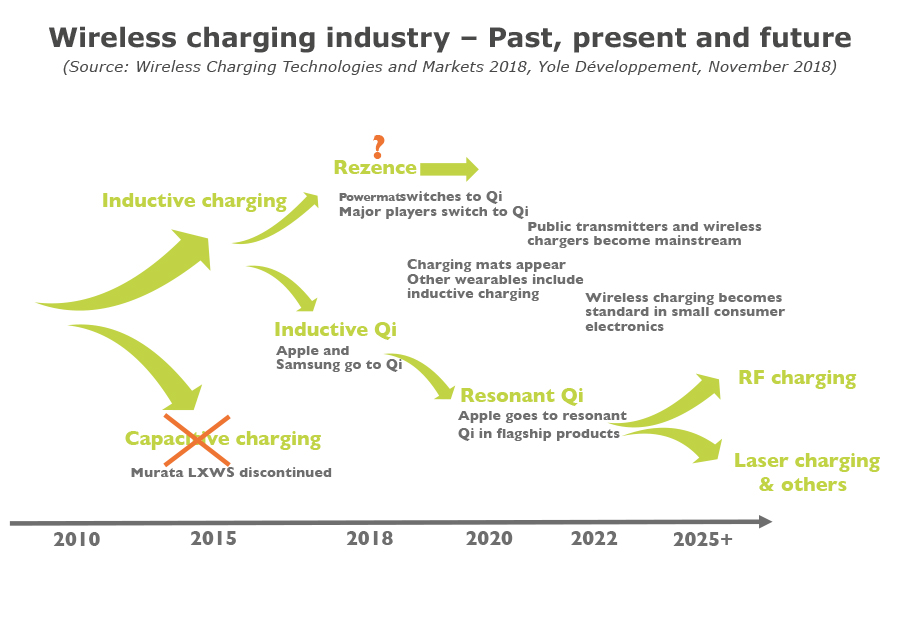 AN ECOSYSTEM READY FOR MASS PRODUCTION

The apparent technical complexity of putting a smartphone into a strong electromagnetic field has efficiently been handled by technology developers, and in just a few years a complete industrial chain focused on mobile phone inductive charging has coalesced.

It is interesting to note that the value chain for inductive charging is quite similar to the one in development for resonant charging. Indeed, even if the physical mechanism is different, the technological content is quite similar: consisting of inverters, rectifiers, drivers, buck converters, and coils. In fact most industry players are developing products for both technologies, i.e. Infineon Technologies offering component samples for 6.78 MHz resonant charging, and at the same time semiconductor components for 105 – 205 kHz inductive charging.

Though still nascent, the industrial chain is already consolidated, with large semiconductor corporations offering best-in-class electronic components. Player diversity is mainly on the integration side right now, with wireless charging popping up in diverse new systems ranging from cars to furniture.

Technology integrators are ready for technological adoption. Names not typically associated with consumer electronics appear in this market: Ikea with transmitters in its HEKTAR desktop lamps, and Duracell, which manufactures the Powermat for Starbucks.

These companies, working in concert with electronics companies like NXP, IDT, and Infineon, bring their solutions to market mainly by following a single standard called Qi. Indeed, from what originally started as just two alliances – the Wireless Power Consortium (developing the Qi standard) and AirFuel Alliance (developing the Rezence standard), the Qi standard has established dominance and is preferred by most if not all smartphone manufacturers. This includes Apple, which at one point tried developing its own wireless charging standard.

In this report, Yole’s analysts analyze the wireless charging ecosystem and offer our take on the positioning of these industry players in the future of wireless power transfer and wireless charging. 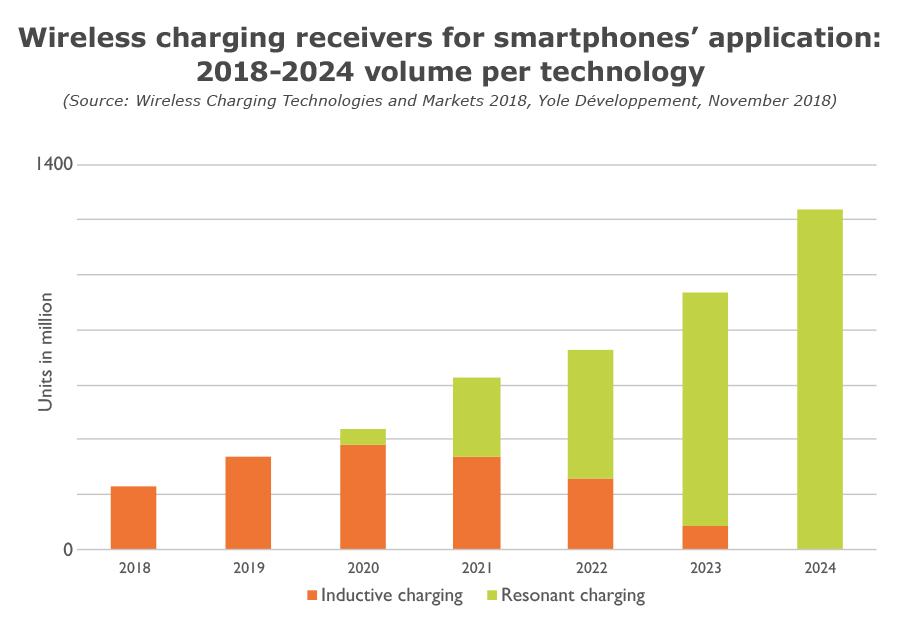