Following the lead of Oppo, one of its major competitors in China, Xiaomi has introduced 3D depth sensing hardware in a special version of its latest flagship cellphone, the Mi8 Explorer Edition. Unlike Apple, which relies on high dynamic range sensors, or Oppo, which relies on a special system-on-chip that uses Orbbec’s in-house algorithms, Xiaomi has chosen Mantis Vision’s solution and its coded structured light to provide the 3D sensing capability. The 3D systems comprise a dot projector and a camera module assembly configuration.  On the receiver side, the near infrared (NIR) image is captured by a global shutter (GS) NIR camera module.

The front optical hub is packaged in one metal enclosure, featuring several cameras and sensors. The complete system features a red-green-blue (RGB) camera module, a proximity sensor and an ambient light sensor. The 3D depth sensing system comprises the NIR camera module, the flood illuminator and the dot projector.

This report will be focused on the analysis of the 3D depth sensing systems. All components are standard products that can be readily found in the market. That includes a GS image sensor featuring 3µm x 3µm pixels and standard resolution of one megapixel and two vertical cavity surface emitting lasers (VCSELs), one for the dot projector and one for the flood illuminator. Both are from the same supplier. Both the camera and dot projector use standard camera module assemblies with wire bonding and optical modules featuring lenses. In order to provide coded structured light features, a mask is integrated into the dot projector structure.

This report analyzes the complete 3D depth sensing system, including a complete analysis of the NIR camera module, and the dot projector, along with cost analysis and price estimation for the system. It also includes a physical and technical comparison with the 3D sensing systems from Apple in the iPhone X and from Oppo in the Find X. 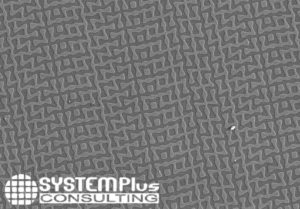