High-Performance Computing and cloud gaming are setting the bar for leadership in the high-end CPU and GPU markets.

THE HIGH-END COMPUTING HARDWARE FUELING THE KEY APPLICATIONS IN THE DATACENTER SPACE: CLOUD GAMING AND HPC

The last few years have witnessed the rise of the leading-edge Graphics Processing Unit (GPU) and Central Processing Unit (CPU) markets. This has been driven by a host of datacenter applications, such as exascale computing and Artificial Intelligence (AI) training. Among these, Yole Développement has decided to dedicate a brand new report to High-Performance Computing (HPC) – including supercomputing and HPC-as-a-Service (HPCaaS) – as well as cloud gaming, which are expected to trigger further market growth in the coming years.

The gaming industry has never been in such good shape as today. Boosted by mobile gaming and by increasing revenues from PC gaming, the industry is expected to be worth $140B in 2019. In this favorable environment, cloud gaming is entering as a new platform for streaming a game directly on the preferred device of the consumer. Out of a total of 2.5B potential gamers, Yole Développement expects that cloud gaming will interest above 200 million players by 2025. This will mainly be console gamers that will use cloud gaming through their own device. It will also include transitional gamers that are used to playing on mobile devices and want to have an equivalent experience on their smartphones as they have on their PC/console. Among the leading-edge datacenter applications, cloud gaming is the fastest growing market segment with a Compound Annual Growth Rate from 2019 to 2025 (CAGR2019-2025) exceeding 70% for both CPUs and GPUs. This will make the cloud gaming CPU/GPU market worth $14B in 2025.

Observing the current state of supercomputer systems allows Yole Développement to infer the evolution of more accessible HPC platforms, such as the HPC-as-a-service platforms offered by tech giant companies like Google, Amazon, and Microsoft. In 2019, the CPU and GPU supercomputer businesses are estimated to be worth $2.4B. Considering the list of projects worldwide for new supercomputers, the overall business is expected to be stable. However, this trend depends on a lot of public decisions on developing and building a new top five supercomputer that will dramatically boost CPUGPU demand.

Thanks to the growing convergence of AI and HPC, the HPCaaS market for CPUs and GPUs will continue to grow with a CAGR2019-2025 of 25%. Most of the growth can be ascribed to GPUs, with a CAGR2019-2025 of 40%. GPUs are becoming the workhorse technology for data/computingintensive AI applications performed in the cloud. The HPCaaS GPU/CPU market is expected to grow despite the rise of specific Application Specific Integrated Circuit (ASIC)/Field- Programmable Gate Array (FPGA) technologies dedicated to AI tasks. It could be worth $18.6B by 2025. 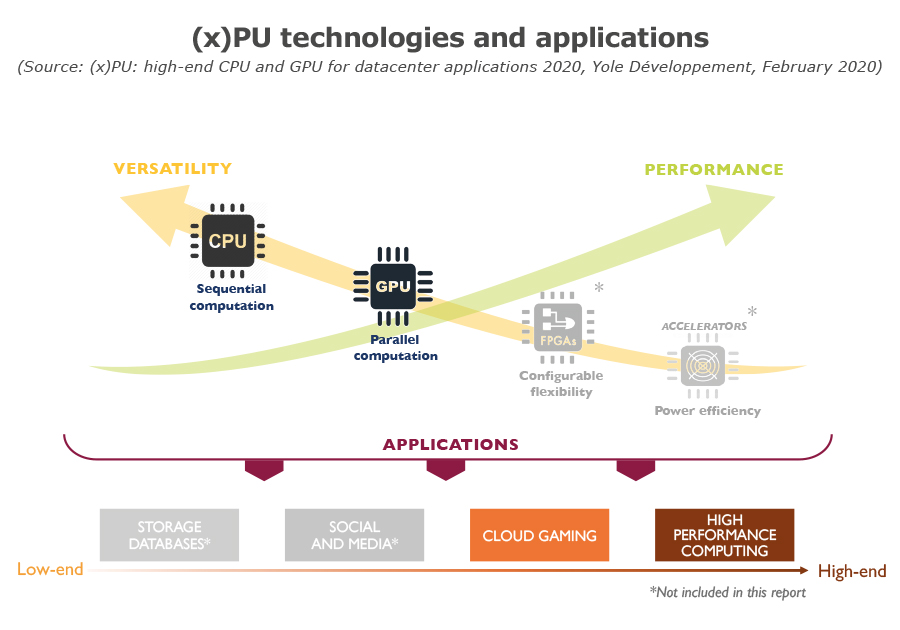 Today, only few companies are capable of supplying CPU/GPU chips, among which Intel supplies CPUs, and likely also GPUs in the near term, and fabless players such as NVIDIA supplies GPUs, and while AMD supplies CPUs and GPUs.

Since the 1970s, Intel has been the unquestioned CPU leader. It reached this position by outspending others in capital expenditure and by building leading-edge fabs that cost billions of dollars and become obsolete very quickly. Semiconductor foundries arose in the 1990s, to be followed by the introduction of GPUs, and the rise of several fabless companies. In 1981, IBM adopted Intel’s x86 CPU for its PCs under the condition that Intel would provide a second-source manufacturer, AMD. Since then, Intel and AMD entered into an exchange agreement and the competition for the CPU market began. Currently, AMD has the technology lead, being ahead of Intel with its 7nm process, manufactured at TSMC. Since 2017, with the introduction of the EPYC line of server processors, AMD has progressively increased its market share in the server CPU business, approaching mid-single-digit market share in 2019. Without counting integrated graphics from Intel, NVIDIA and AMD control nearly 100% of the GPU market. In recent years, Intel has repeatedly discussed its entrance into the discrete graphics market, with its first Xe chips for the PC space. Intel itself has stated more than once that it is on track to release graphics cards in 2020. Historically, NVIDIA won the GPU market and became a leader in general computing for multiple reasons: 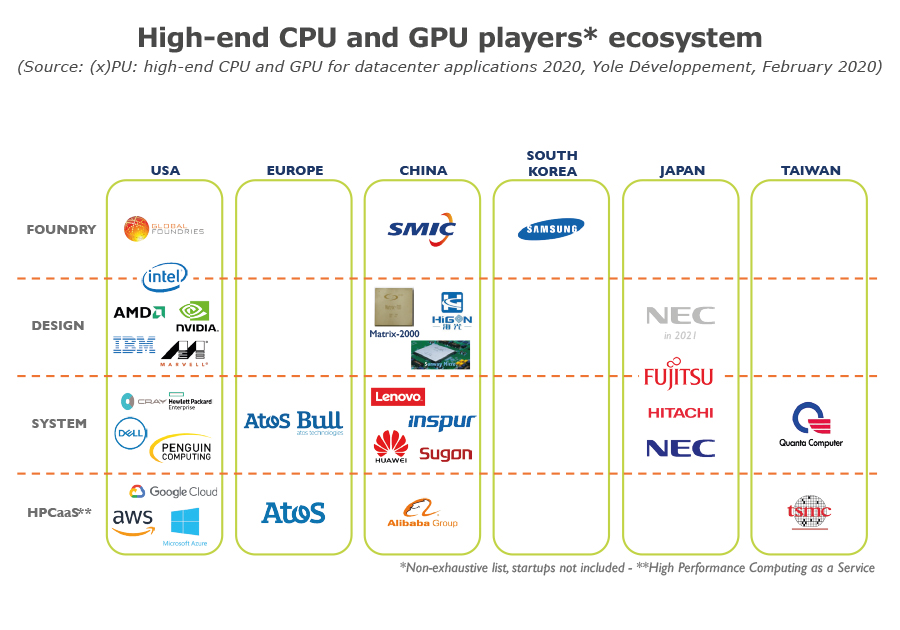 THE STAKES FOR ADVANCED PACKAGING

HPCaaS, cloud gaming, supercomputing: all these fields require computing hardware with low latency, high speed and low power consumption. Today’s packaging technologies, such as through silicon vias (TSVs), make those requirements achievable with footprint reduction due to vertical stacking of multiple dies. Nowadays TSVs are very widely used in HPC applications, in the highend market, due its stringent requirements and because cost is initially less critical. Hybrid bonding and 3D Systems-on-Chips will also have an impact in this market in the coming years. Nevertheless, there is still much for TSV technology to do. It should demonstrate that it can be used for very fine pitch applications below 10μm, and achieve higher reliability to enable its use in other markets than the HPC and high-end segment. Today, only a few companies can handle the full interposer manufacturing process. They are currently able to increase production of interposer wafers if the market requires it. This is not needed now as the High Bandwidth Memory (HBM) supply is still low compared to demand, which directly impacts the number of interposer wafer starts. Many Outsourced Semiconductor Assembly and Test (OSAT) and Intellectual Property companies are developing proprietary technologies that may replace TSVs soon. The competition will be tough in the coming years for TSVs. 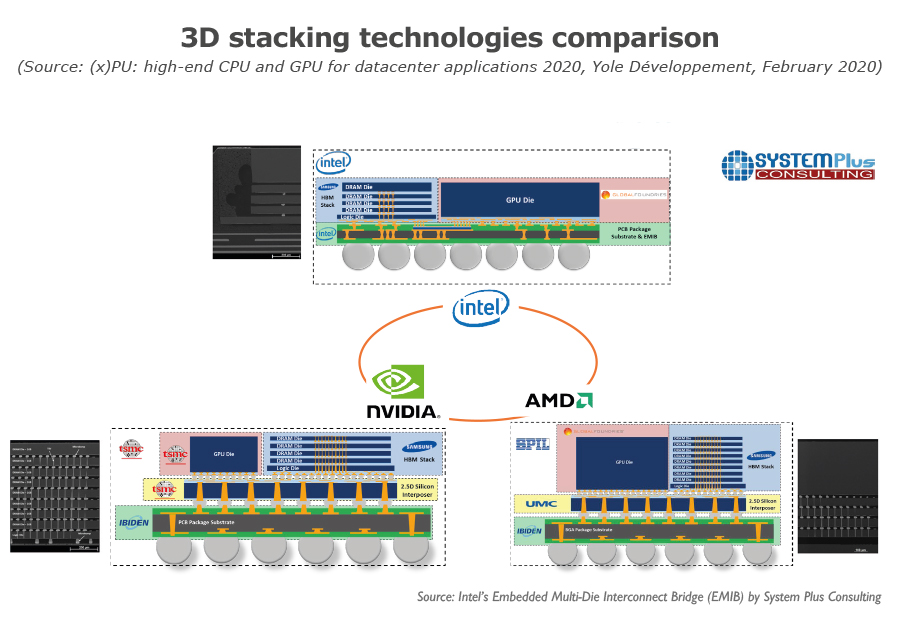