In 2005 STMicroelectronics (ST) became one of the pioneers in introducing MEMS devices into mobile phones for motion sensing applications, after Knowles paved the way in 2003 with silicon microphones. ST has been able to grow from less than $100m in 2005 to $1B in 2012, the fastest and highest growth in MEMS history, making it the first company to reach $1B sales.ST is the leader in many sectors, according to Yole’s newly published “Status of the MEMS industry 2015” report. Those sectors include accelerometers for consumer applications, and MEMS foundry services. ST also has a very strong product portfolio with gyros, 6-axis and 9-axis inertial combos, microphones, and micromirrors, which are used in some very innovative applications by Intel.
Since its 2012 peak, ST’s MEMS sales have declined to $800M amid fierce competition with Bosch, Knowles and Invensense to dominate consumer electronic applications and the MEMS industry in general. We have interviewed Benedetto Vigna ST’s Executive Vice President & General Manager of Analog, MEMS & Sensors Group, on the evolution of his company’s MEMS activities, its diversification strategy outside mobile phone markets and how ST will be able to reverse its downward revenue trend. 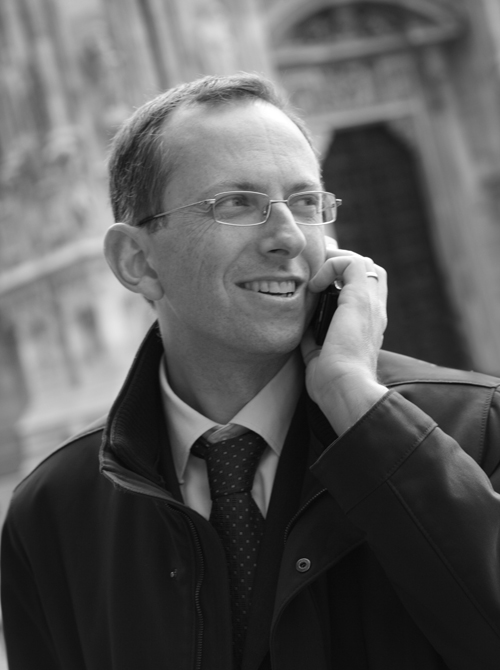 Benedetto Vigna: Our MEMS activity started 20 years ago with thermal actuators for thermal inkjet printheads. In 2005 we started high volume production of accelerometers for the consumer market. That was the start of the consumerization wave. In 2010 we started high volume production of gyroscopes. In 2011-2012 we foresaw the natural decline of motion MEMS and thus we started to differentiate our offering with new products and new technologies. Microphones and environmental sensors are two new classes of sensors where we are active strongly today. Moreover, on top of our original thermal actuators we also developed piezoelectric, electrostatic and electromagnetic actuators, like scanning mirrors. We are also present in accelerometers and gyroscopes for the automotive, industrial and medical markets. Our product offering is much wider than it was four years ago when we started our successful diversification strategy.

YD: What are ST’s competitive advantages in the MEMS area?

BV: ST’s key added values are the following: we have in house a state of the art and balanced MEMS product and technology portfolio, covering sensors and actuators, with at the moment a very strong market momentum in microphones. We have developed a 0.5 mA Ultra low power 6-axis combination accelerometers and gyroscopes, perfect for wearable devices, which is just introduced on the market at the moment. ST ultra small and thin gyroscopes for optical image stabilization is also a new product we are now proposing to our customers.
All these products are supported by ST leading edge MEMS technology and manufacturing integration, with a wide range of available micromachining technologies, very strong synergies in ST with with microcontrollers and wireless products.
ST has also developed sensor fusion software open to developers and available now on the web. I think it will be a great platform to support the development of applications including ST devices. 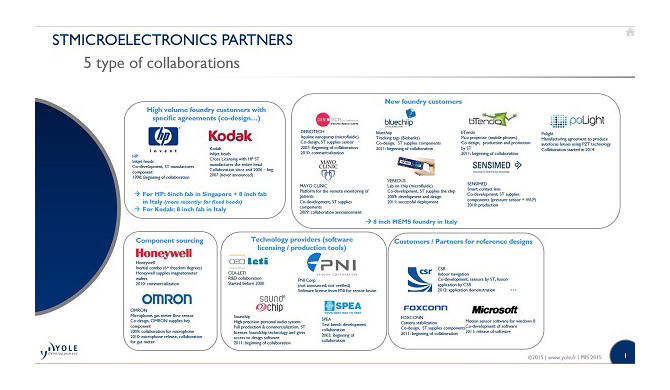 YD: Smartphones have been the major market driver for MEMS for the last 5 to 10 years, and now wearables and internet of things (IoT) seem to be the future opportunities. How is ST positioned to benefit from these opportunities?

BV: In the future we see ‘more smart, less phones’. Smartphones continue to be an interesting market for sensors. We see opportunities for gyroscopes for optical image stabilization and pedestrian dead reckoning. We continue to see growth of microphones in smartphones. While the smartphone MEMS business is flattening, we see good opportunities in wearables, smart cities and smart environment overall. Thanks to our complete offer in terms of sensors, microcontrollers and low power radio we are well positioned. For more info please visit the following link: www.st.com/bluemicrosystem1


YD: Do you see automotive coming back as an interesting driver for future MEMS growth, e.g. in autonomous cars? What are ST’s plans to address this market?

BV: Automotive MEMS is a market segment that will grow in the future. We are number one in MEMS for NOT safety applications in the automotive market. There are already cars in the street in Asia and Europe with our MEMS.

YD: Can you comment on ST’s plans for new MEMS devices such as micro mirrors, gas sensors or maybe infrared sensors? Are you planning to launch new types of sensors?

BV: Diversification is a must. Companies having only one class of sensors do not have a sustainable future. We launched several classes of MEMS families and we will continue to do so to sustain our growth. We are investing in different sensors and various actuators.

YD: What do you see as the next technological “game changers” for MEMS? Advanced packaging, sensor fusion, 300mm production, piezo thin films?

BV: Piezo thin film is definitely a new game changer in the world of MEMS.

YD: Regarding piezo thin films, you announced volume production of autofocus and inkjet products by the end of this year. Can you comment on the challenges you are facing? Do you see other products in the near future with this technology?

BV: Piezo thin film technology is well suited for fast printing in the commercial and industrial printing market, but also for high speed micro-actuators able to move light and tiny objects. Autofocus is an application we are working on with our partners.

YD: Do you see a threat coming from the possible entry of big semiconductor players who today are not involved in MEMS?

BV: I see consolidation, not additional players. The market is not big enough for other players to enter an already-crowded market place.

YD: InvenSense’s acquisition of Movea has highlighted that sensor fusion is a hot topic. Can you explain to us ST’s position on sensor fusion and how you envision its future?

BV: Sensor fusion is important, but customers also want the freedom to use their own sensors or a mixed blend. Thus we decided to open up our sensor fusion software on the www.st.com web site so that customers can use what we have and adapt it to their needs.

YD: We saw a shift of ST sensors from high-end smartphones to mid-range smartphones addressing especially the mid-range market in China. Has Yole got the right analysis?

BV: We are present in high-end, middle and low end smartphones. In 2014 alone, we introduced our motion MEMS into more than 70 smartphones. I do not believe your analysis is right.

YD: What is the impact on your volumes and revenues of such evolution?

BV: China is a growing marketplace for us. And we are selling more and more gyroscopes and 6-axis combos.

YD: What do you think the next steps of ST’s growth are in the MEMS industry?

Benedetto Vigna is Executive Vice President, General Manager of the Analog, MEMS & Sensors Group, and has held this position since September 2011. He is a member of ST’s Corporate Strategic Committee.
Vigna joined STMicroelectronics in 1995 and launched the Company’s efforts in MEMS. Under his leadership, ST’s MEMS sensors found early success with large OEMs for motion-activated user interfaces and ST has become the MEMS top maker. More recently Vigna has piloted ST’s successful moves into microphones, magnetic sensors, and touch-screen controllers, as well as environmental sensors, micro-actuators, and low-power radios. Vigna’s responsibilites also include ST’s Sensors, RF, High-Performance Analog and Mixed Signal, Interface, Audio for Portable, and General-Purpose Analog products.
Vigna has filed more than 170 patents on micromachining to date, authored numerous publications, and delivered many speeches at international conferences. He sits on the industrial board of several EU-funded programs. Vigna’s contributions to the MEMS industry have been recognized with the Executive of the Year Award by the MEMS Industry Group (2013), the European SEMI Award (2013), and the IEEE Frederik Philips Award (2015).
Benedetto Vigna was born in Potenza, Italy, in 1969, and graduated with a degree in Subnuclear Physics from the University of Pisa, Italy.

Quantum technologies: the market is growing