Fan-Out Wafer-Level Package (FOWLP) is currently the fastest-growing advanced packaging technology, and it will continue growing, towards a $2.4B market by 2020. In this context, more and more fan-out packages will be included in mobile and wireless applications – which remain the main drivers for this package type. (Yole Développement’s report, “Fan-Out WLP: Technology Trends and Business Update 2016”, will be released within the next few months).

System Plus Consulting recently performed a Reverse Costing® on a high-volume FOWLP component found during the teardown of the Samsung Galaxy S7, Qualcomm WCD9335 Fan-Out WLP Audio Codec report. The component, the audio codec, is only present inside some versions of the Samsung Galaxy S7 and S7 Edge. Yole Développement interviewed Romain Fraux, MEMS & Advanced Packaging Project Manager at System Plus Consulting, for more details.

Yole Développement (YD): Could you please introduce System Plus Consulting and its activities?
Romain Fraux (RF): System Plus Consulting utilizes an engineering approach to cost. We combine cost models and technology expertise to provide customers with an accurate, objective estimation of manufacturing costs and selling prices. We specialize in technology and cost analysis of any electronic device and system type, with a special focus on semiconductor technologies. Our analyses are used by purchasing departments to measure their suppliers’ cost structure; by R&D departments to confirm technological choices depending on their cost impact; and by Benchmarking/Marketing departments to monitor products on the market.

YD: The FOWLP platform is gaining increased interest. Is this already something you see in available products?
RF: Yes, it’s a trend we’ve observed not just in telecom, and particularly for automotive radar applications where FOWLP minimizes transmission losses from chip to package and board with a standard solder reflow assembly process. Two big users of FOWLP for 77GHz automotive radar are Infineon with its eWLB technology, which we found inside a Bosch radar module, and NXP with its RCP technology, which we extracted from a Continental radar module. The reports analyzing these technologies’ process and cost structure are available on our website.

YD: So this audio codec is different than the European version of the S7? Can you comment on that? And also, what are the pros and cons of each version?
RF: Two players supply Samsung with the audio codec in the Galaxy S7 and S7 Edge: Qualcomm with the WCD9335 in versions featuring the Qualcomm Snapdragon 820, and Cirrus Logic with the CS47L91 in versions using the Samsung Exynos 8890 processor. Samsung did not use Qualcomm for the Galaxy S6; Cirrus was in 100% of those phones. For the Galaxy S7 and S7 Edge, we don’t know the exact repartition in terms of volume, but according to Cirrus it is something in the 60/40 range in their favor.

The interesting fact is that the audio codec supplied by Cirrus is packaged with a traditional fan-in WLP, compared to a fan-out WLP for Qualcomm. In term of silicon usage, the Qualcomm solution, which also uses an additional A/V processor from DSP Group, consumes 40% less silicon area compared to the Cirrus solution. Therefore, thanks to the FOWLP process, Qualcomm is able to propose a very small die independent of the area required by the I/O pads. In the end, since the silicon cost is the largest part of the component cost, Qualcomm’s solution is very competitive compared to fan-in WLP.

YD: What technology was used to create this audio codec packaging?
RF: The FOWLP technology used for the Qualcomm audio codec is eWLB, licensed by Intel/Infineon to several OSATs including ASE Group, Nanium, and STATS ChipPAC. eWLB has been in high-volume manufacturing for several years; we first observed it in 2009, in an Infineon baseband chip used in an LG feature phone. Since then, it’s been difficult to find other components using this technology, and this is the first time we’ve seen Qualcomm use it. Regarding the exact supplier of this eWLB packaging, it could be someone using the Intel/Infineon license, but after decomposing the marking on the package it appears that the codes do not correspond to a “standard” OSAT used by Qualcomm – and we know that ASE Group and STATS ChipPAC are standard OSATs. 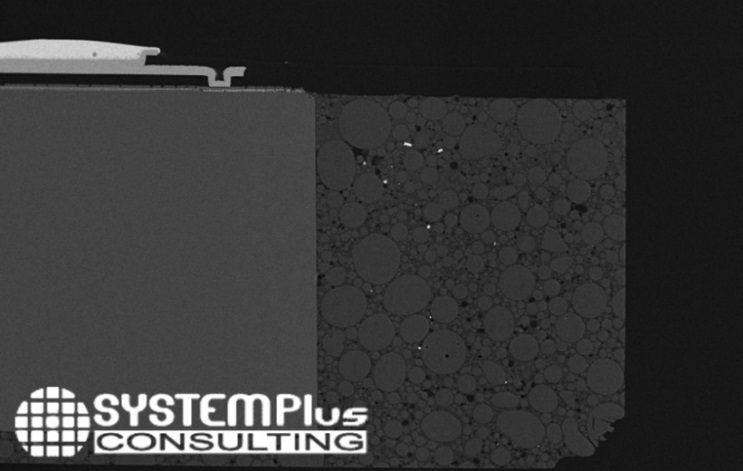 YD: What other technologies are available on the market, and who is using them?
RF: Fan-Out is gaining in popularity, and many applications (in telecom, automotive, and medical) are starting to implement it. Since there are diverse applications, the needs are also diverse and consequently there are numerous players who have created or are creating their technologies and desire market share: eWLB, as mentioned before, is popular with important providers like STATS ChipPAC, ASE Group, and Nanium; Amkor has developed its SWIFT and SLIM technologies; PTI has a panel fan-out; and there are others too. OSATs are actually not the only players involved – TSMC and its InFO product were able to enter the Apple market thanks to proprietary fan-out technology.

YD: Should we expect Qualcomm to produce more of these packages?
RF: Yes, Qualcomm will most likely provide more products with fan-out packages. Qualcomm has qualified it and introduced it to important products like the Samsung S7, so it is clear there is added value and large potential. That said, other important telecom players are also far along in qualifying fan-out, and therefore numerous products using a fan-out platform will likely appear and follow the trend.

Romain is Project Manager for Reverse Costing Analyses at System Plus Consulting. Since 2006, Romain has overseen costing analyses of MEMS devices and advanced packaging. He has significant experience in the modeling of the manufacturing costs for electronics components.
Romain holds a BEng in Electrical Engineering from Heriot-Watt University in Edinburgh, Scotland, and a master’s degree in Microelectronics from the University of Nantes, France.
Since 2009, he has published numerous reports on advanced packaging devices, including fan-in and fan-out WLP, embedded die packaging, and 3D TSV packaging. Romain has also published more than 50 Reverse Costing reports on various MEMS devices, including inertial, pressure, microphones, and RF sensors.