Over the last few years, the imaging world has taken us on an impressively innovative ride, fueled by Apple’s understanding of CMOS micro camera modules’ digital imaging capabilities, along with miniaturization technologies that brought DSC (Digital Still Camera)-like performance to smartphone cameras.

Apple jumped head-on into the mega-pixel race with a 2MP on the first iPhone, and then outdid itself with the iPhone 3GS and its 3MP camera. In 2010, came the revolution: BSI on the 5MP iPhone 4. This event effectively ended the digital still camera market as we knew it. More recently, Apple introduced PDAF (Phase Difference Auto Focus) pixels on the iPhone 5 to improve autofocus speed. And on the iPhone 6, Apple introduced OIS (Optical Image Stabilization) to the mass market.

Which brings us to the present day, where Apple’s market and technology leadership is so impressive that it’s difficult to name a technology that Apple hasn’t introduced or helped mass-market. And while Apple wasn’t the first to move on OIS, it did make the technology mainstream.

Apple hasn’t yet embraced the laser depth-ranging technique introduced by LG and adopted by several Chinese brands, but it may in time. However, with DTI (Deep Trench Isolation), the latest technology Apple is promoting, the company seems to have taken a step backwards – for the simple reason that this technology has been available from almost every sensor vendor for at least the last few years. So does this mean that the industry’s leading innovation engine is running out of steam? 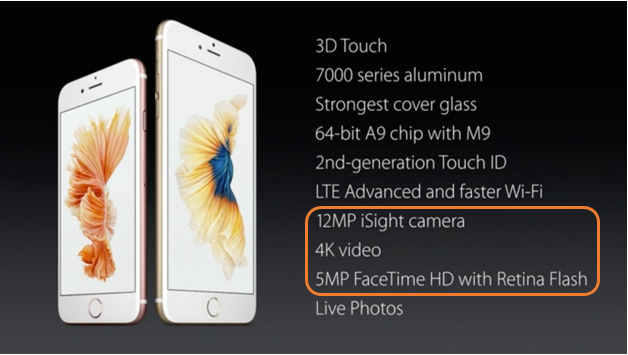 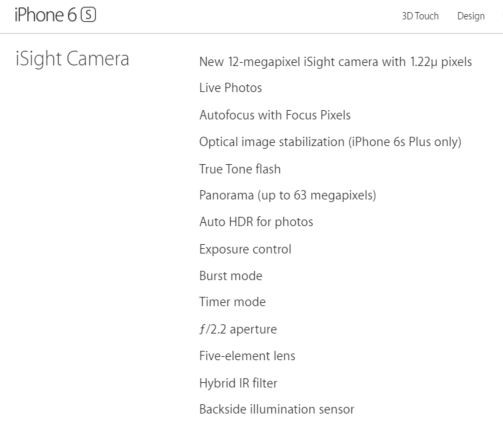 The primary camera’s MP increase is mainly due to pixel shrink and the now-popularized DTI technique. In fact, Sony can deliver a higher resolution sensor with slightly less silicon so that the Optical Format and therefore the device cost is slightly reduced. However, Yole is doubtful that Apple’s “small pixel/high-resolution approach” offers significant performance improvement versus the previous 8MP generation. Why? Because the “small pixel/high-resolution approach” is exactly what Apple’s competitors have been doing for years, while Apple was claiming (rightly so) that it could offer better images with bigger pixels in a smaller quantity.

With the quality of Sony’s sensors in mind, at least we can say that current 6S specification probably hasn’t deteriorated the image quality; but the gain isn’t very significant either. Therefore, the primary camera’s only real improvement is its 4K video capability — but this aligns with the whole industry, since LG, Samsung, and Huawei have it too.

The secondary camera’s MP increase is not a surprise since it was already at 5MP on the previous model, but Apple/Sony bundled the pixels (“binning”, in tech-speak) and made the camera much better under low light conditions. But though the Sony guys may have worked really hard to improve the front camera pixels’ low light performance, no real breakthrough should be expected in terms of performance.

The bottom line is that Apple is offering more resolution (MP) but minimal image quality improvement. The company has finally moved on from its previous “big pixel/lower resolution” approach– a move that’s not as radical as it sounds, since Apple still has a 1.22um pixel when everyone else favors 1.12um. This is only a +20% light exposed surface difference (the 1.5um pixel was a +80% difference). The reason for not being able to further their previous approach is lack of space. The iPhone’s thickness (7.1mm) is a major barrier to increasing resolution via the “previous Apple approach” (please refer to this articles first illustration), so Apple must now do what everyone else has been doing for some time: shrink the pixel.

In summary, Apple’s choice of micro camera specification for the 6S is very similar to the competition’s choice. This marks the end of a long, impressive eight-year solo ride. The “S” update doesn’t represent a significant hardware change, and the current proposition is not a big surprise. Yole expected a bigger pixel and a larger optics aperture, i.e. F#1.8 or F#1.9. This could have contributed to a better camera, but it would have cost a little more and likely taken a chunk of Apple shareholder profit.

We’ll have to wait another year for the iPhone’s big hardware update. Video is the new innovation paradigm, followed most likely by 3D imaging within a few years. Now that the competition is closing in on Apple’s proposition, Apple must make a significant technological leap forward. Our take on this is that such a leap is definitely possible, and even underway. It could involve the Linx technology Apple acquired last year, the integration of STMicroelectronics’ laser ranging technology, and probably even more…

Stay tuned – things are about to get interesting!