Tronics’ range of high performance MEMS sensors GYPRO® won the Industrial Innovation of the Year award during the 2015 BREF Rhone-Alpes Trophies ceremony. This distinction rewards the innovative approach of the group in the inertial sector.

Tronics, a designer and manufacturer of innovative nano and microsystems, won the Industrial Innovation of the Year award, during the 2015 BREF Rhone-Alpes Trophies ceremony held on 23 November 2015 in Grenoble. This prize rewards Tronics’ high performance MEMS inertial sensors GYPRO® for all the benefits it brings to fast-growing markets with high added value. 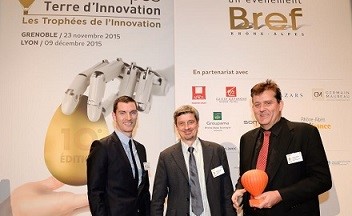 Resulting from a strategy of development resolutely focused on key partnerships with an innovative approach, Tronics aims to pursue this momentum with its new standard product range GYPRO3300. These MEMS inertial sensors from the GYPRO® family offer significant technology improvements and already show a strong attractiveness with several customers and prospects.

“We are pleased to have been rewarded for all the achievements we made on our standard product range GYPRO®”, said Pascal Langlois, Chief Executive Officer of Tronics. “This distinction confirms the recognition from an entire ecosystem for the innovative aspect of our high performance MEMS inertial sensors, and testifies to the potential and the relevancy of our strategy to offer an efficient and sustainable answer to fast-growing markets with high added value”.