With approximatively 1.5B 5G cellphones expected to ship in 2025, the market for RF components in 5G applications is already strategically important. RF front-end modules (RF FEM) are among the key components for 5G applications, and the market will be highly impacted by the new standard. But which companies own the patents? This is a very important question that KnowMade answers in its new, just-released report RF Front End Modules for Cellphones – Patent Landscape Analysis.

The telecommunications revolution of the early 21st century triggered the development and proliferation of abundant communication devices. According to recent estimates, there is almost one mobile/cellular handset for every person on Earth. One consequence of such phenomenal growth is the concomitant demand for data, which has led to the need to for increased radio spectrum. Indeed, from just four bands in the 2000s, there are now more than 30 bands – a number that will increase with 5G’s arrival. To manage these bands, RF modules for mobile handsets have seen tremendous development.

Today we are taking the first step towards 5G networks, which by 2020 will become an RF communication standard. The 5th generation of cellular networks is expected to arrive in the next 2 – 5 years, enabling a plethora of new applications and services, and gigabit-per-second data rates. One of the key drivers for developing such speeds is high-resolution video demand (attaining 4K and 8K quality and beyond) on mobile devices. Furthermore, future applications, such as mobile-driven augmented and virtual reality, will benefit greatly from such technical capabilities. Also, data generated by Internet of Things (IoT) end-devices will need to be transmitted over the cellular network. Global mobile data traffic will therefore grow at an astonishing compound annual growth rate (CAGR) exceeding 40% from 2017 – 2022.

According to Yole Développement (for more insights into Yole Développement’s RF Front End Modules and Components for Cellphones 2017 analysis and 5G’s Impact on the RF Front-End Industry analysis), the RF FEM market for 5G cellphones is estimated to reach USD $7.8B in 2020, and is further projected to achieve USD $35.3B by 2025, at a CAGR of 35% from 2020 – 2025. Since 5G comes with strong technology challenges that could reshuffle the cards and change the mobile telecommunications landscape, IP strategy thus becomes critical for ensuring players a strong market position in the coming years.

Here are the most important results: through 2017, more than 1,380 RF FEM inventions have been published worldwide by more than 500 patent applicants. Patenting activity related to RF FEM emerged in the late 1980s with mobile phone pioneers like Alcatel, Motorola, and Panasonic. RF FEM IP activity has since been closely linked to the development of new standards. For example, the first increase of patent publications in the 2000s parallels the democratization of mobile phones and the arrival of 2G and 3G standards. 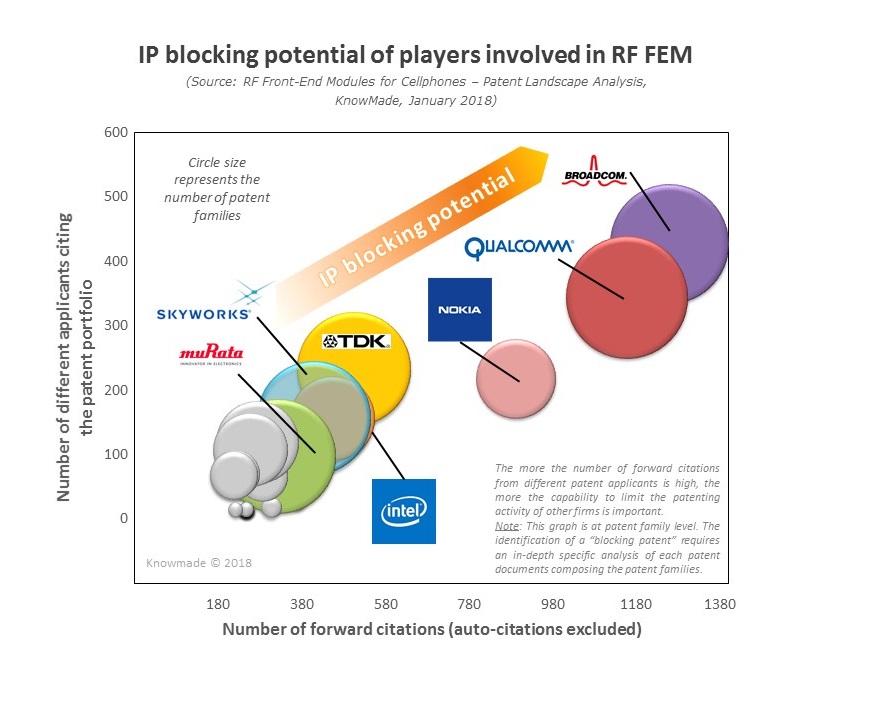 Since 2010, 4G and the inevitable 5G (which require developing new technologies) have revitalized patenting activity, in the wake of 3G’s deployment and the market’s consolidation (2008 – 2012). Today, the IP landscape related to RF FEM for cellphones is fueled by market leaders, and M&A activities have consolidated the patent portfolios of the industry’s major players: Qualcomm, Broadcom, Skyworks, Murata, etc. What is surprising is that several players more prevalent at integration level (i.e. LG Innotek, Samsung Electromechanics, HonHai) are also among the top 20 patent applicants in RF FEM. Also, the rapid development of Chinese companies’ R&D activity is pushing established players to actively deploy and protect their inventions and market. Interestingly, Oppo is the 20th most-important applicant, while Apple does not even crack the top 20. 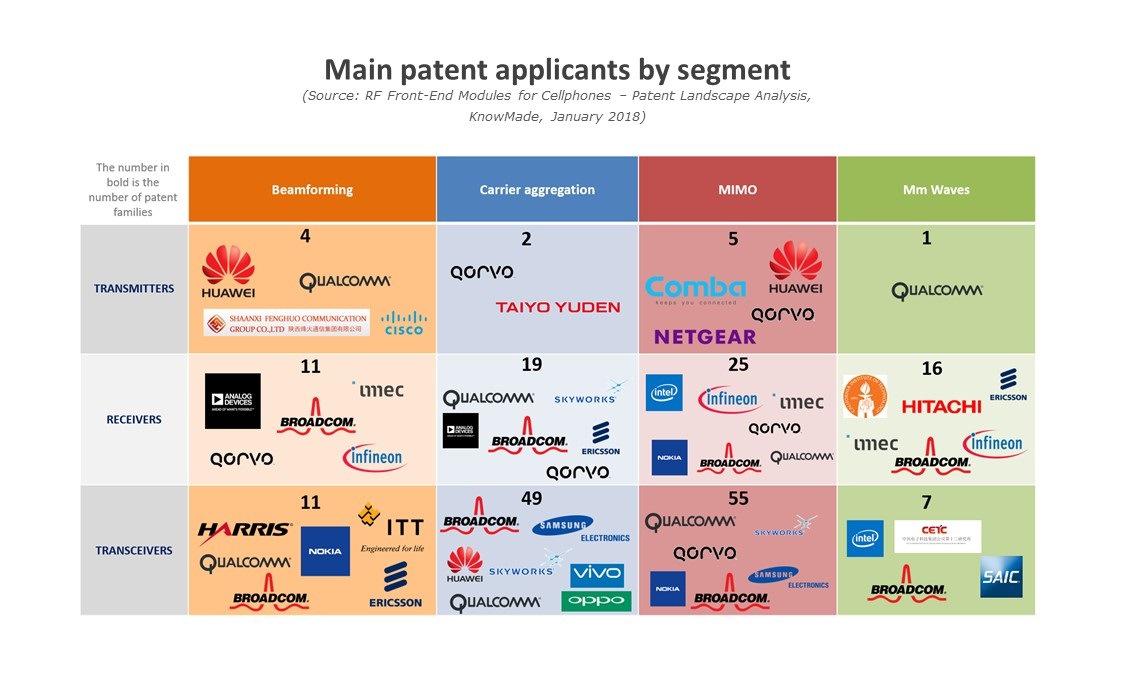 As suspected, companies like Broadcom, Qualcomm, Qorvo, Skyworks, and Nokia have the highest patent portfolio blocking potential. However, the most important part of KnowMade’s analysis is the subject of the patents. Carrier aggregation and MIMO receivers/transmitters are the most patented subjects amongst all the patents analyzed by KnowMade, but this isn’t surprising since they are among the main topics for 5G. However, what is very surprising is that an important new trend linked to mmWave communication is currently not the subject of many patents. This means that it is either a very complex R&D topic and the companies working on it lack innovative solutions, or many patents are forthcoming and we are still in a “grey area” prior to their publication.

With 5G emerging as a key market at device, module, and system level, you can expect a fierce patent battle between players! This new report from KnowMade paves the way for an understanding of what will happen…

Covid-19: Semiconductors at the Heart of Turmoil

FCBGA packaging reaches new heights to US$12 billion by 2025

Intel turns to TSMC: another step towards fabless?